The Albino or ''White'' Doberman 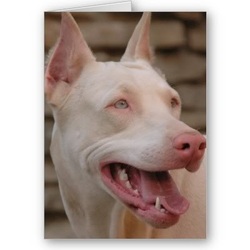 The first albino Doberman recorded by the AKC was Padula's Queen Shebah. Shebah was born in November of 1976. Her parents were two normally-colored dogs, Rasputin VI and Dynamo Humm.  Interestingly, Shebah's breeders claimed that Rasputin and Dynamo Humm had produced an albino male in a previous litter; however, this dog died at a young age.
All the albino Dobermans that have been registered by the AKC are descendants of this single dog, Padula's Queen Shebah. Approximately 11,300 descendants have been registered with the AKC over the last 28 years, and roughly 1830 of these have been albino. The other 9470 or so are presumed to be carriers of the albinistic trait (the only method currently available for separating carrier from non-carrier descendants is by breeding them). All descendants are now tracked through the "z list", which records all dobermans descended from Shebah's parents and registered with the AKC.

At the time that the z list was originally put together, there was some question about seven dogs which were registered as white but not related to Shebah. However, it appears that these dogs were probably fawns which had been misregistered as white. Dr. Jim Edwards, who was at that time Director of Judging, Research and Development with the AKC, made the following statement: "This investigation has uncovered an additional seven (7) Dobermans registered as "white" and not included in Shebah's pedigree. These occur sporadically, with ages varying from two years to fifteen years. Only two of these have produced litters, and only three litters have been registered. We are continuing our investigation into these cases and will provide appropriate updates to the DPCA when our analysis is complete. I am encouraged that this number is small, remembering that color assignment is sometimes difficult for the novice breeder."

Dr. Jonathan Dodd, editor of the Doberman Quarterly, stated:"The basis for this system is the genetic proposition that all of the "white" Dobermans which have been registered by the AKC stem from a single genetic point in time. Based on this model, it was hypothesized that one or both of the parents of the first registered "white" Doberman would appear in the extended pedigree of every "white", as well as that of every animal producing a "white" offspring. Examination of AKC records has borne this out. Only a few exceptions have been noted and are being investigated, as will any future exceptions. Most presumably result from the mis-identification of fawn animals."

Interestingly, the registration on Padula's Queen Shebah was originally rejected by the AKC. When the registration application was first sent in, the owners wrote "albino" in the color section. The AKC rightfully returned the slip to the owners, explaining that albino is not a color.  Without consulting the Doberman Pinscher Club of America (DPCA), the AKC then independently decided to register Shebah as white (even though she was not actually white). Her registration became official in 1979.

The AKC standard for the Doberman pinscher was amended in 1982, to disqualify dogs "not of an allowed color". Allowed colors are black, red (called brown in other countries), blue, and fawn (also referred to as Isabella).

In 1983, the DPCA bought two albino bitches for breeding studies. These dogs and their offspring were found to have faults such as poor conformation, poor temperaments (aggression and fear problems, problems with trainability), multiple missing teeth, photosensitivity, sunburn, and so on. In fact, most of the puppies out of these test litters had to be euthanized because of their extremely poor temperaments. Additionally, at least one of these original albinos is known to have died of skin cancer.
"white coated" and "white factored" Dobermans should NOT be bred. These dogs are *TYROSINASE POSITIVE ALBINOS*. In 1996, the AKC established a tracking system (the letter "Z" will be part of the registration number) allowing breeders to identify the normal colored Dobermans which may carry the albinistic gene. A list with all dogs tracing back to Shebah's (the first Albino Doberman registered) parents is available here. All breeders should require an AKC certified pedigree with colors to check that "white coated" and "white factored" dogs are not present in the pedigree of the dog or bitch to be bred.


Sources:DPCA, whitedobes.com
No picture or text can be copied or redistributed without express permission of site owner.