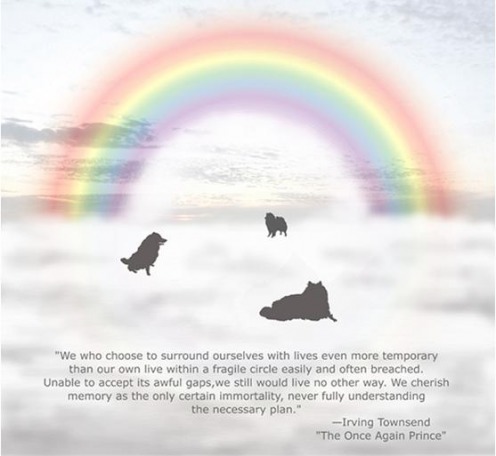 Touch me with your spirit, for God sent me here to you,
To teach you of that precious bond known by the choicest few.

Touch me with your hands as I grow tall and strong,
I need you as my mentor through out my whole life long.

Touch me with your eyes as I become full grown,
To validate unspoken love that we have always known.

And words need not be used in our language any longer.

Touch me with your breath, so soft and warm upon my face,
As I try to bring you comfort in life's never ending race.

Touch me with your love when my muzzle turns to gray,
I live my life to please you, each and every single day.

Touch me with your lips, and brush them softly on my brow,
Please kiss away the fears that I am feeling now.

Touch me with your scent when age has dimmed my sight,
To reassure me always that you will be my light.

Touch me with your face when your tears are meant for me,
So I may bear your pain and let your heart be free.

Touch me with remembrance when I have traveled on,
And hold me in your heart forever when I'm gone. 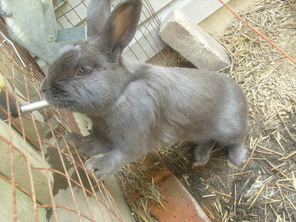 I bought Izzy from the pet store by us at a young age. He was our first pet bunny ever. He was about 2 years old and passed away on 3-10-10 and is missed. He was a great bunny that had alot of personality. When he saw someone come through the door he "expected" to get a treat of some kind. He LOVED alfalfa, sunflower seeds, carrots and fresh fruit pulp left from our juicer. We think he may have learned from the dogs, because he liked to dig and was good at escaping his pen. He never once bit. He was a kind and fun loving bunny. He took special interest in our cat Nu-Nu and I will never know if he thought she was a bunny or not. May you rest in peace, you have a special place in my heart. 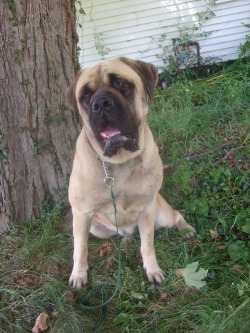 Safari was my first Mastiff. This is not easy for me to do and she was near, and dear to my heart. I will try and do this the best I can, though I wish I never had to. Safaris origional name was "Jade" but I never cared for it. I promptly searched the internet to find the perfect name for her and one that fit her well. After a week of searching, I fould "Safari"-which means a journey, her middle name was "Rogue"-which was a term used for a wild/untained animal. I chose these for specific reasons. First "Safari" was on a journey to rehabilitation. "Rogue" because in the beginning she was an untaimed, unsocialized, and regretfully, without manners. I thought the names fit her perfectly, and just hoped I could tame this wild girl. I looked forward to the day I could add to her name to show her improvement, but sadly it was not meant to be.

I got Safari from someone who couldn't handle her anymore and was going to take her to the shelter. After a few days of pleading, she finally agreed to let me have her.
Safaris issues likely stemmed from not being socialized for long enough and not being taught basic manners. With her only being in a small area while in the house. Only outside to bathroom. No walks, No family time. Her issues excellerated from nice puppy to dominant dog. The owner tried placing her in two other homes before I came along, which she was promply returned. Her problems were most severe around other dogs, but she was not friendly to straingers or kids either.

Now fast forward to the present. I had delt with her behavior and taught her best I could but she was never ok with our or any dogs except our pug mix Rhoco. For some reason they were the best of friends. He was never scared of her, never doubted her when she was sometimes less than friendly. She was a very dominant female who took her family as of great importance. She was fiercly protective of me or our home. In the beginning she was very frightened of people and would lunge out of fear. After much teaching she learned obedience, which she excelled in and enjoyed. She got better with people, to where if they gave her treats she was OK with you. It did take a couple meetings, but once you earned her trust she was a lovebug and wanted only to be loved and petted.

After many attempts to re teach her to be OK with other dogs, through many fights and tears I decided to put her to sleep for the last time. I ran it over and over in my head before so many times Iv'e lost count. I diddn't want to do it, because I diddn't want her to be another one of the statistics. I wanted her to be the succesful rehabilitation storie. I tried so hard and used many late night hours to reading and researching things I could try. I will never be happy with my self for not knowing what I could have done or what I could have tried. I took her on, "knowing" I could fix her, that she would be a great dog and would make a 100% turnaround.

Her favorite things were me, playing, and "attacking" the water from the hose. Unfortunatly I never got a chance to take pictures or a video of her doing it. It was quite comical. She would jump straight up in the air to grab it.

After another fight, the first with our male mastiff, I decided that I couldn't risk her hurting my other dogs anymore, or putting myself in danger. I had to defend them as much as I did her. So it is with a heavy heart, that I put my misunderstood baby to rest today. We spent a few hours together, took a walk, posed for many pictures and videos and had a last meal. I held her in my arms as she left her body to run at Rainbow Bridge. I hope you forgive me girl, know that I loved you and I hope your life was good with me. 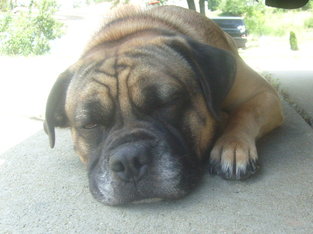 Rhoco was a Pug X and shares my moms same birthday, 12-1-2006. He was brought from a lady that I worked with a few years ago. His mom was a purebred pug but his dad was a question mark. We have his sister also. Every one of the pups in the litter looked the same and gave no indication of daddys breed. The owner of his mom could only tell me his dad was medium size and same coat color. We have guessed Beagle, Pit Bull, and Boxer. He had a great temperment but takes guarding the house seriously. Yet once the people are given the OK he is sitting by their feet waiting to be petted. Once you start petting he makes sure you dont stop! I love Rhoco and his temperment he is so loving and caring. He sleeps with me every night, he has his own pillow and rests his head on it too! He enjoys treats and eats about anything you give him. He passed his CGC test on August-22-2010 with flying colors. He took his TDI test on September-11-10 and passed, we are so proud of him!
On April, 21, 2011 Rhoco was taken from us much to early in life. While I was out with him and Dewey before work early in the morning I left him and Dewey to check on one of our other dogs for just a second. In that time a van came down our normaly quiet road and hit Rhoco. I did not see the accident only heard his cries, those cries will stay with me forever. This subject brings bitter memories of the accident and terrible emotions still run through me if I think of it too long. The van who hit him backed up and slowly continued on its way when it seen me. By the time I reached Rhoco (about 10seconds) He had made it back into our yard about 40 feet from the road. He had already collasped when I reached him and was gone. I held him in my arms and cried so hard, I don't know how my neighbors diddn't hear me. I cradled him close and cried for the remaining 4 hrs I had with him before I had to have his body taken to be creamated. I cannot think to long about the accident for fear of uncontrolable tears. The next day I decided that I would make Rhoco a "roadside memorial cross" the kind typically seen on highways where a person has died. It was traditional white and I wrote on it and nailed his picture on it. I placed the cross in the spot by the road where I think he may have been hit. Words cannot say how much Rhoco meant to me. He was that special soul you meet once in a life and connect. I believe he was my canine soulmate. Rhoco was love, protection, giving, laughter, curiousity and the best snuggler and listener. He will forever hold a special place in my heart. I love you buddy.

When Tomorrow Starts Without Me
Author Unknown

No picture or text can be copied or redistributed without express permission of site owner.